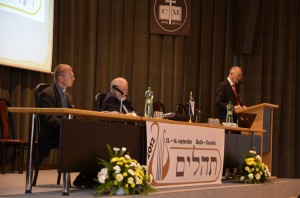 The International Biblical Meeting on Psalms with the subtitle:  PSALMS 2012 – Through the eyes of their authors and later reception – has taken place in Badín (Slovakia) in September  13th – 14th 2012. It was organized by the Department of the Biblical Studies of the Theological Institute at Cyril and Methodius’ Faculty of the Roman Catholic Theology of the Comenius University in Bratislava. This biblical Meeting was an outcome of the cooperation of the other three Slovak theological faculties…

– the University in Trnava, of the Catholic University in Ružomberok and in cooperation with the Department of the Philosophy and Religionism of the Greek-Catholic Theological Faculty, University in Prešov and simultaneously with the participation of the Pontifical Biblical Institute in Rome (Italy).

There were twenty two speakers who presented their conference papers in various languages (English, German, Italian, Czech and Slovak). For the abstracts of all papers see A guide of the Conference – Sprievodca Konferenciou Žalmy 2012, on the page 8-19.

The introductory section of each day was led by the main visiting exegets with their skilled papers. In the first day of the Conference Prof. Gianni Barbiero from the Pontifical Biblical Institute in Rome dealt with the theme of the interpretation of A non-violent Messiah in Psalm 110 and Prof. Frank-Lothar Hossfeld from the Bonn University (Germany) dedicated his paper to the theme of The reading the Book of the Psalms as a whole.

Some of the presented papers in the Conference PSALMS 2012 in Badin will be published in the following edition of the periodical Studia Biblica Slovaca.

This entry was posted in Aktuality, Konferencia. Bookmark the permalink.